The resurgence of thrash

For quite some time now, true thrash metal has been almost non-existent. In parts of the country, in the underground scenes, and even in the mainstream, more bands are bringing it back. From the big Thrash bands back in the day (Sepultura, Metallica, Anthrax, Megadeth, Slayer, Exodus, Overkill, Kreator, etc.), few are still active AND still making thrash metal. While thinking about thrash metal without the legends who made the genre what it is makes metalheads sad, there is still a lot to look forward to. 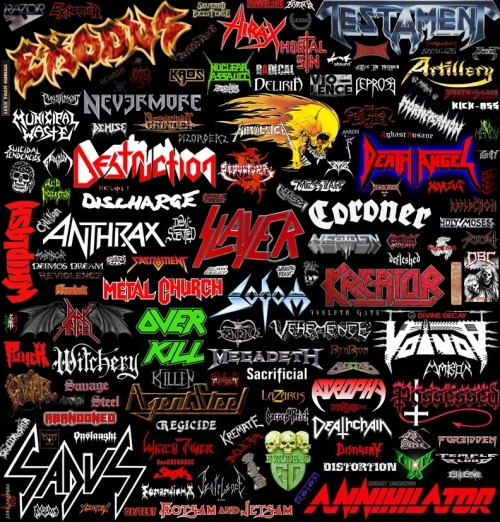 If you look around on MySpace music through the “Thrash” genre tag you will find many things, most of which are not thrash. Some things that aren’t even metal. If you look deep enough, there is some good old thrash metal to be found. Most of these bands were either around in the 80’s, or are made up of teenagers who look and act like they were teens in the 80’s. Fatal, Ravage, Evil Army, and Razormaze are just a few of the up-and-coming young thrash bands out there. It’s not just the new guys, either. Slayer is still going strong, Metallica’s Death Magnetic was clearly turning more toward their old school sound, and Kreator just started a summer tour with Exodus – all well known bands in the thrash scene from the 80’s.

Given all the changes going on in metal, perhaps the resurgence of traditional thrash is the largest. Instead of bands like Shadows Fall, Chimaira, and Unearth adding the “trash” tag onto their music, real thrash bands are taking it back. A lot of more mainstream bands have been trying to bring the thrash sound to their band, like Bullet for my Valentine, Machine Head, and Trivium. Tough to say where it goes from here, but it seems as though thrash will soon be back again, and in a big way.

(disclaimer: I did not make the image above, nor am I taking credit for it – here is where I found it)

The Heaviest Matter of the Universe Awards 2008

So, I thought it might be cool if I came up with a bunch of superlatives for metal albums in ’08 to showcase more than just my top ten. So, for those who don’t know what a superlative is, you most likely had nothing to do with a high school yearbook. They’re like awards that you give to people in your class, like “class clown” or “best smile”, etc. These will be music/band related ones. I hope you enjoy!

Bests:
Vocals: Iconoclast – Heaven Shall Burn
Drumming: Planetary Duality – The Faceless
Shredding: Awaken the Dreamers – All Shall Perish
Newcomer: Relentless – Brother Von Doom
Production: Awaken the Dreamers – All Shall Perish
Lyrics: The Way of All Flesh – Gojira
Comeback: Traced in Air – Cynic
Style Change: Scream Aim Fire – Bullet for my Valentine
Name (album): Lost in the Sound of Separation – Underoath
Name (band): This is Exile – Whitechapel
Album Art: Twilight of the Thunder God – Amon Amarth
Album opener: “My Will Be Done” from The March – Unearth

So, yeah, that’s what I have come up with. Let me know how you feel! Got some you think I should add or change? I’d love to hear the criticism.