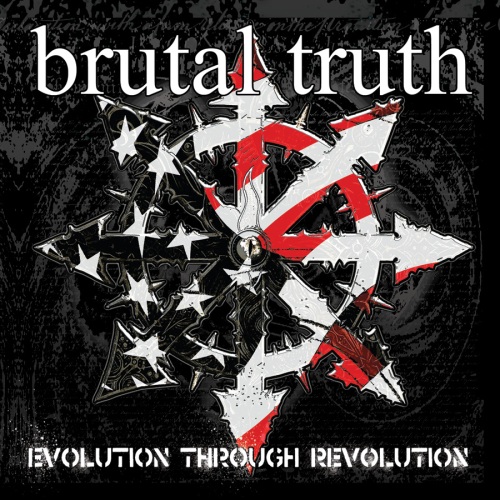 It takes something really special for a grindcore album to be a lot better than the other albums in the genre. Bands like The Tony Tapdance Extravaganza have figured it out with their last release, Danza II: The Electric Boogaloo. Brutal Truth, however, haven’t quite got the “it” factor on this record. It’s a very solid and pleasing grindcore record, and living up to their name, it is truthfully brutal.

For a grindcore album, Evolution Through Revolution is about as long as they come, clocking in at just over forty-one minutes. There is a ton of material on the album, but nothing that is really too interesting or different. This is both good and bad. For those who are simply looking for an all out brutal face-tearing riff and breakdown festival, this album is just that. There are no breaks, no breathers, almost nothing that steps out of the very little grindcore box. For such a long grindcore album, there should be a little more going on with it.

In truth, this really is one of the most brutal records I have ever heard, but with that being said, it gets boring fast. It sounds very chaotic, but it is pretty systematic from song to song (as much as a grindcore album can be, anyway). In the end, I enjoyed the album, and recommend it to fans of the genre, but would not really recommend it to anyone else. If you’re looking to check out Brutal Truth, one of their first two records would be a much better idea. Extreme Conditions Demand Extreme Responses is their first and best album, but their second album, Need to Control finishes a close second.