Gojira – The Way of All Flesh [Review]

The Way of All Flesh is the fourth full-length album from French band Gojira. Set to release October 13th in Europe, and October 14 in the United States. This is their second release on world-wide label Prosthetic Records, the third with French label Listenable. 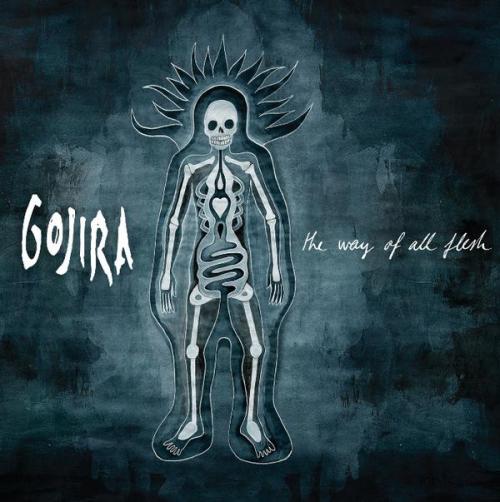 First of all, I just want to say that this is a band that does not get the recognition it deserves. I really hope that this album will serve to change that.

The Way of All Flesh seems to have picked up right where From Mars to Sirius left off, almost literally (specifically note the guitar in the opening part of “Oroborus” and the end of “Global Warming”. This is most definitely a good thing, because From Mars to Sirius was one serious progressive death metal album. From their first album on, this band has gotten noticeably better. With From Mars to Sirius being one of my favorite albums as of late, I was very excited to put this one on.

In terms of the album’s structure, there are no problems. I would not say it is a strength either. Interestingly enough, the album’s first single does not appear in the first 3/4 of the album. It is in fact the third to last track, which is something I have not personally encountered very often. The single is an interesting choice, in my mind, however. It is very much unlike most of their music, whereas a lot of their other stuff was very quick-paced, and involved a lot of speed, half of “Vacuity” is slow, and pulsing – then moves to some familiar stuff – then changes to unfamiliar territory once again. A great track all in all, but a surprising choice and placement on the album.

The two main strengths of this album are it’s consistency and strength of the individual songs. Excluding “The Way of All Flesh”, “A Sight to Behold”, and “The Silver Cord” any of the tracks on this album would have made a solid single. The non-single-worthy tracks, however, are almost essential to the album itself. Each provides a fair change of pace, and a break of the monotony that Gojira can become.

The fact that each song on the album is quite distinct is what separates it from From Mars to Sirius, which could really be the only real difference (aside from the obvious fact that the songs are not exactly the same). On From Mars to Sirius all of the songs sort of blended together after a few listens, whereas this is not the case on The Way of All Flesh.

On a more technical note, the production quality of this album is absolutely perfect. The mixes range quite differently at times, sometimes being guitar heavy such as the track “The Art of Dying” but are also very balance at times, such as the track “Esoteric Surgery”. The one thing I noticed that I really like, though some others may dislike, is the volume of the snare drum and toms. I liked the fact that they were fairly loud in the mix for almost the entire album. They have such a bright, crisp sound that adds a lot to the songs that have such a dark sound. The best example I noticed of this is in the track “Yama’s Messengers” where each snare hit is very clear and obvious in the mix, bringing attention from the constant grind of the guitar and bass drum parts.

With a fresh batch of brutal songs, Gojira has put together a very strong fourth release, and in my opinion their best to date (inches out From Mars to Sirius by a nose). While staying in-character and using slow triplets and grinding guitar sections, they have added a few small dimensions to the mix that only help make the listener appreciate the things that make up what Gojira are known for. Where the band goes from here in unknown to me, but I can almost say for certain that it will be good.