Deicide – To Hell With God [Review]

To Hell With God is the tenth release by Tampa-based death metal band Deicide, and was released February 15, 2011 as the band’s first release under Century Media records. 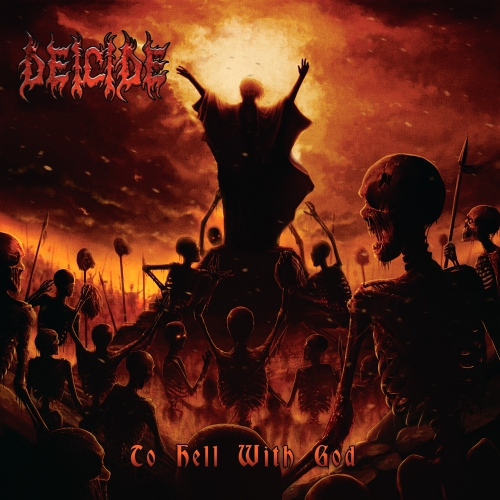 Known as one of the original, best, and most brutal death metal bands in the history of the genre, Deicide have never ceased to assault and please ears with each new release. In their history the band has seen little transformation or deviance from their relentless sound, though the lineup changes post-2004 when the Hoffman brothers ceased their guitar-playing duties with the band. To many cries of “not as good as before!” Deicide have still managed to put out another album that’s stands true to the genre they helped pioneer.

There is but one unescapable truth regarding To The Hell With God: while it falls directly in line with the post-2004 releases it lacks a certain leaded fury that was delivered when Deicide enlisted the Hoffman brothers. Unlike many accounts I’ve encountered, however, I think this is both a good and bad thing. Let’s start with why this sucks. Deicide were most certainly one of the heaviest and most brutal bands that seemed to get as close as possible to the “over the top” mark into the “silly” territory, and seemed to be masters of doing so, but they’re no longer quite as close to that mark, almost as if they’ve let off the throttle a bit.

Outweighing the negatives of being heavy to the brink of silliness is that the production is leaps and bounds better than the band had once featured on their albums. Glen Benton’s vocals are perhaps the best they’ve ever been and you can actually hear them in the mix–as you can each of the instruments in the band. There is nothing lost amidst the overwhelming heaviness of the album that Deicide occasionally fell prey to. With this more modern sound for the band also comes a more modern style of death metal than perhaps diehard Deicide fans are used to, but it’s closer to the classic Deicide than Till Death Do Us Part and The Stench Of Redemption.

Quite literally, the only “fault” of the album is that it’s not exactly like the Deicide of old, but I’m not complaining. To Hell With God is a great album, and it is fantastic to hear a classic band staying relevant by bringing their creativity and influence to the table in order to help reshape the genre in which they were of the first contributors to. Song after song, album after album, Deicide continue to show us why they’re a deserving candidate for the throne of death metal king.

Song picks: “Empowered By Blasphemy” and “How Can You Call Yourself A God”