Slipknot – All Hope Is Gone [Review]

All Hope Is Gone is the fifth studio from Des Moines, Iowa band Slipknot. Release date is August 26, 2008 in North America. 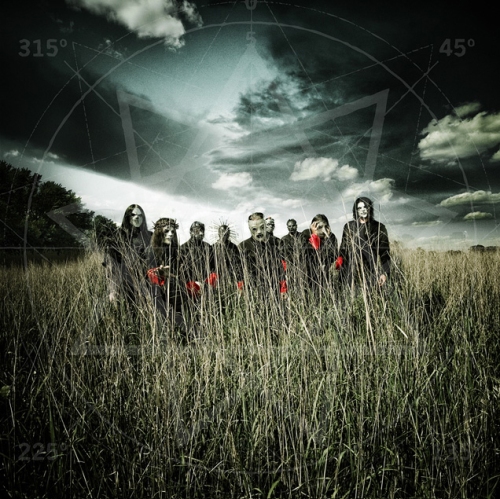 “It’s going to rip your face off,” Slipknot vocalist Corey Taylor tells Billboard.com with confidence. “I don’t think the world will be ready for this album.”

With confidence, I must say, he’s right. This is by far their most brutal album to date, and easily their most metal. They’re beginning to differentiate themselves from the rest of the dying “Nu Metal” breed.

One thing that seems to turn most metalheads off of Slipknot is their lack of: blast beats, blistering guitar work, and constant/extended double bass drum machine gun riffs. Well, guess what, guys, they’re here. Slipknot show off their technical skill and mettle with this album far more than ever before (excluding the masterpiece Mate.Feed.Kill.Repeat with the original lineup). Overall, the music has not changed in overall sound, it’s as brutal as ever, but they’ve added more “musical” elements. When I heard the first guitar solo on this album I was shocked to say the least. Slipknot with some fancy-pants guitar work? Hell, I never thought I would hear it, but it works, and works well.

There are people that would say that Joey Jordison is the best percussionist around. While this is obviously not true [see: Thomas Haake, Morgan Ågren, Neil Peart, etc.] he at least puts up a fantastic showing compared to previous efforts. More pounding on the kick drums, more polyrhythms, and some brutal breakdowns. He’s got a ways to go until he can show us he really is of the best, but still incredibly talented none-the-less. A fresh take with the new cymbal usage (not only Jordison, but the Fehn and Crahan as well) certainly does not help with the new and improved percussion section.

The songwriting hasn’t changed at all really from Vol. 3: (The Subliminal Verses). The lyrics have become slightly more mature, but not a whole lot. It is still dealing with very similar issues as in previous albums, but are now phrased in a more global, aware, mature manner. Aside from the new additions to their repertoire (the aforementioned guitar solos and drum work) the album sounds an awfully lot like Iowa with glimpses of things they used in their self titled release.

From song to song the mood swings quite dramatically. Ranging from brutal and angry to optimistic, it is far more open than anything Slipknot has done. Some examples of some outside-the-box thinking compared to the Slipknot of old would be the chorus to both “Wherein Lies Continue” and “Psychosocial”, both having very optimistic, positive sounds and messages, even while being imbedded in some of the most brutal stuff that Slipknot has ever produced.

The album is not very cohesive, but it works. For most albums, when it is not very cohesive it becomes a listening challenge. With All Hope Is Gone there is enough interest from song to song to keep you listening, and the jump from song to song can be fairly abrupt (building a lot of tension), which works with the feeling of the album. Towards the end of the album, you get the soft, ballad-like tune “Snuff” which is this album’s equivalent of “Vermillion Pt. 2” in my opinion. Following that track is “All Hope Is Gone”, which is a straight-up, balls-to-the-wall metal song. It pounds your face in beginning to end, and is a great final track for the album.

All in all, I really enjoyed the album, being a big fan of Slipknot before and felt that they would do well with more solos and machine-gun drumming. Admittedly, the album is not spectacular. It’s good, but not great. Any Slipknot fan of old should really dig it, and they will most likely gain a few new fans from it.