There’s a saying that goes “slow and heavy wins the race” (or something like that). Southern Californian band Xibalba have definitely practiced this mantra for quite some time now, as evidenced in nearly every song they’ve released in their somewhat short history as a band. More evidence of this is provided in their forthcoming sophomore album Hasta La Muerte, being released via Southern Lord on August 14, 2012 (just one year after Southern Lord released their first album, Madre Mia Por Los Dias). 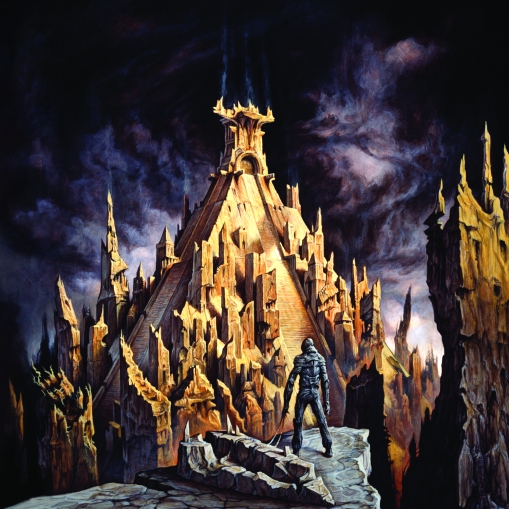 When considering a band’s relative heaviness, anyone who has listened to a considerable amount of heavy music can tell you that it’s not simply tuning down your guitars, adding lower strings, and playing lower notes. Tone, texture, and songwriting are what take low notes and turn up the density meter. Xibalba get this. Guitars churn, drums thunder, vocals roar and together they create a terrifying cacophony meant to convey pure, unadulterated intensity. And it works. Swapping between sludge/doom noise passages and pure hardcore beatdown sections with the ideal balance between loose and tight playing, Xibalba have achieved a truly oppressive level of heaviness on Hasta La Muerte, and are unrelenting when wielding such heaviness.

Unfortunately, such unrelenting heaviness has led to an album that feels a bit one-dimensional in nature. Not necessarily a bad thing, but if you’re looking for anything that isn’t a blend of hardcore and sludge/doom metal to the heaviest degree you’re basically out of luck. Saved from being a disaster by songwriting and sequencing, the most interesting tracks and moments on the album are spaced out enough so that you don’t get bombarded with an overwhelming amount of sameness song after song. Hasta La Muerte is also definitely not for people who have disdain for slow-developing albums as there are a lot of slow, noisy, drone-esque sections throughout the album, especially between the meat of tracks.

Lyrically, Hasta La Muerte is incredibly real and personal, touching on a litany of grief and strife in day-to-day life. Most of the lyrical content pulls no punches, lines such as “I found peace in darkness, and comfort in solitude. There’s no love or feeling in this broken home.” clearly being designed for impact and realness. Opening the song “Stone Hearts” we get a glimpse of the best Xibalba’s lyrics have to offer: “Stone hearts are hard to break. Pound away, try to break me down. Stone hearts will never change.
Cast away, in rubble I’ll remain.”

As an album, Hasta La Muerte is monstrous. From the first drum hits and sustained guitars are a constant barrage of musical haymakers not for the weak-willed. Loud, thick, raucous and relentless: the word “punishing” is perhaps used too often by the metal community at large, but it is certainly applicable here. Almost seemingly imperfect by design, Hasta La Muerte just feels right the way it is. To quote a song from the album, “I never seem to do things right, but it sure feels right.”

I’ve included a Spotify player here for folks who want to check these dudes out. Which should be all of you.